Finally found: the exact location of Vermeer’s ‘The Little Street’

The painting View of Houses in Delft has been in possession of the Rijksmuseum since 1921. After many attempts, the exact location of the painted buildings has now been found.

People have been frantically searching for it for nearly a hundred years. Since 1921, when the painting View of Houses in Delft by Johannes Vermeer came into possession of the Rijksmuseum, there has been wide speculation regarding the exact location of “The Little Street.”

Over the years, various suggestions had been made: addresses with faint outward similarities or places that Vermeer could have seen from his house. None of them were convincing. But now there seems to be conclusive evidence. Frans Grijzenhout, an art history professor at the University of Amsterdam, is certain: Vermeer’s street was Vlamingstraat, at the spot where the walls now bear the house numbers 40 and 42. 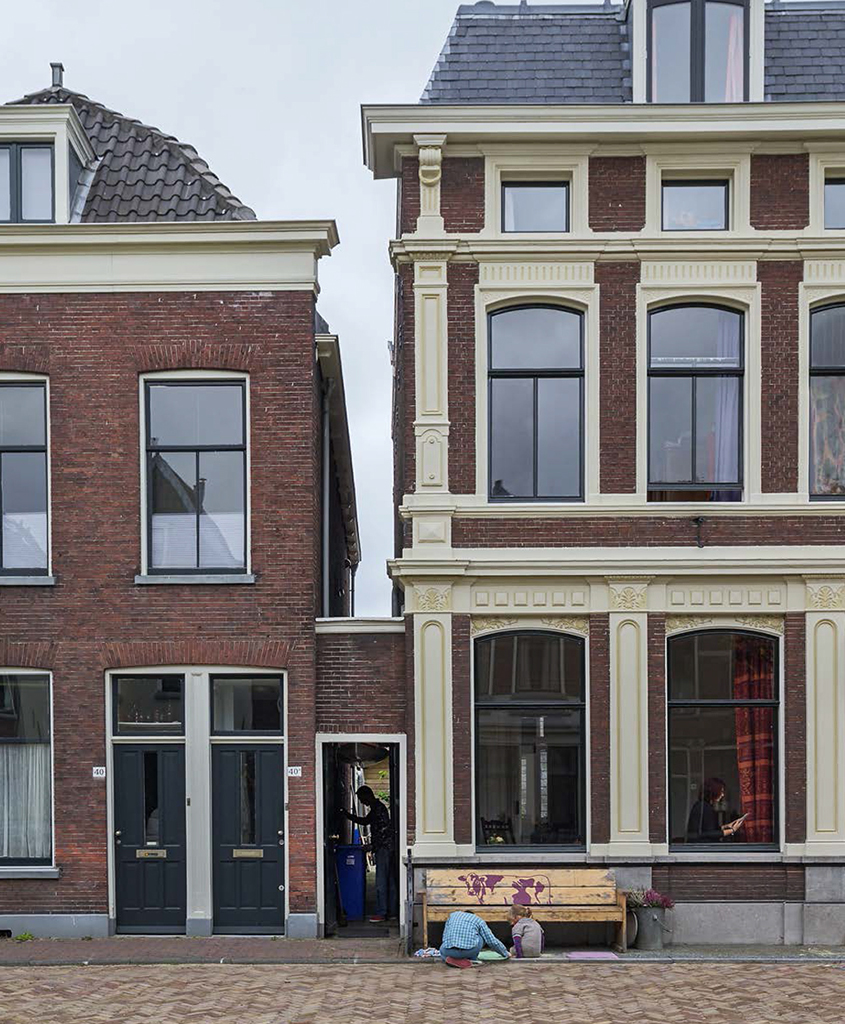 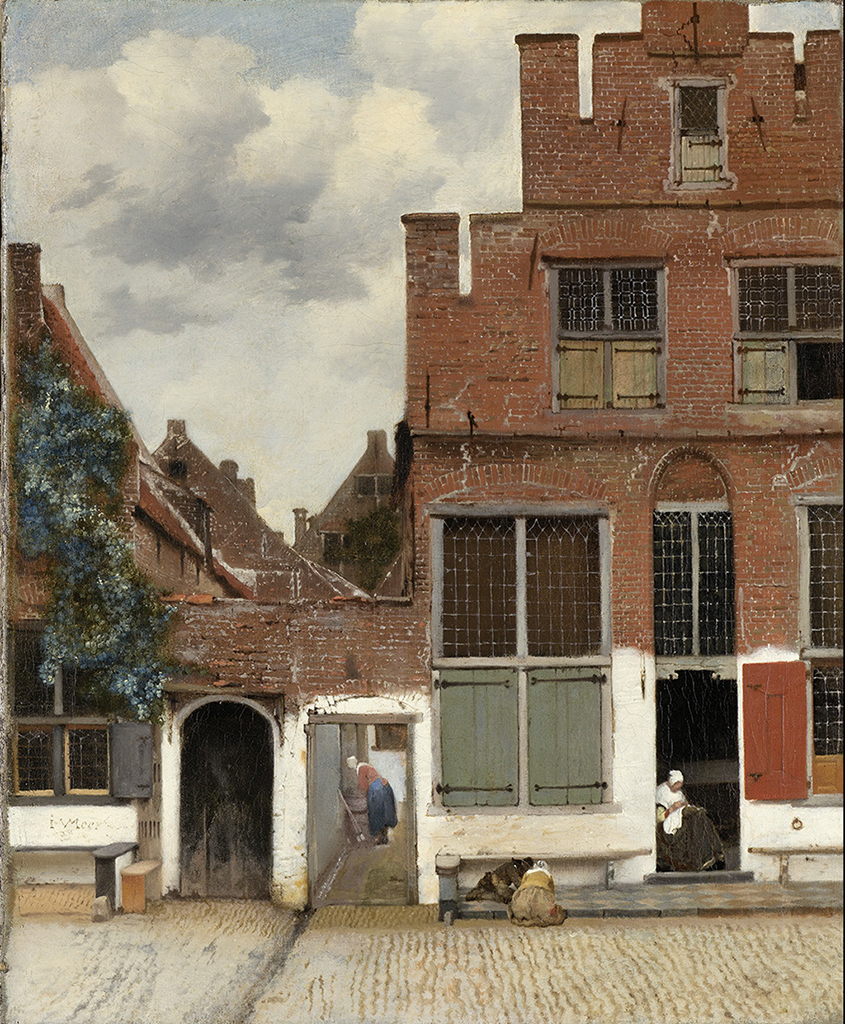 The fact that no one had previously recognised this location was because nothing in the current streetscape resembles the situation when Vermeer was painting. The typical double gate no longer exists – there is no longer an alleyway on the left at house number 40. The house on the right was demolished in the nineteenth century and replaced by a beautiful new building. However, the widths and volumes of both houses and the presence of the gate on the right are still the same. This appears to be the key to solving the mystery.

As a researcher, Grijzenhout is affiliated with the Amsterdam Centre for the Study of the Golden Age, an interdisciplinary programme at the University of Amsterdam. In 2006, together with fellow historian Niek van Sas, Grijzenhout managed to discover and reveal the true identity of the figures in the painting The Mayor of Delft and his Daughter by Jan Steen. This painting, which is the most expensive purchase ever made by the Rijksmuseum, is now called the Portrait of Adolf and Catharina Croeser. For his research ten years ago, Grijzenhout used an important historical source called [the Founder of] the Legger van het diepen der wateren binnen de stad Delft [Ledger of the deep waters in the city of Delft] dating from 1667. In this rare and detailed registry document, it was noted how much “quay and depth money” had been collected per household. These municipal taxes were based on the width of the facade of the houses. “Even then I saw that the registry document also contained useful information about the doorways along the canals of Delft,” says Grijzenhout. “I suspected that this information might lead to the location of the “Little Street”. However, it was autumn 2013 before I had the time to embark on detailed research.”

Earlier investigators had already made a number of useful observations. For example, Vermeer had probably observed the street from the other side of the water and that, given the direction of the light, the address must have been on the north side. According to calculations done on the perspective, the estimated position of the artist was 17 to 20 metres away - wider than the average street in Delft. Also, the gutter painted by Vermeer runs from the right gate into the street and points to a location on a canal. On the basis of the average sizes of the bricks, others had calculated that the width of the house facade on the right-hand side would have been between 5.65 and 7 meters.

With that information, Grijzenhout searched the registry document for two gates, which would have been quite unique in Delft, even before the seventeenth century. Four spots were found that roughly met the description. But one entry in the registry came surprisingly close to Vermeer’s painting: two gates, each measuring four feet, with on either side a house with a 6.28 metres wide facade. “When I saw the spot, I immediately thought this could be it.”

But immediately objections started to appear. At the time of Vermeer, could such an old house have stood in Vlamingstraat? After all, this part of Delft had largely been destroyed during the fire of 1536. And the house that Vermeer had painted was clearly dated from before that time. Then Grijzenhout chanced upon a city map of Delft in Museum Prinsenhof showing the destruction of the city fire. And which house remained standing proudly amid the ashes? The house in Vlamingstraat, approximately on the site of number 42. “When I saw that, I simply had to laugh out loud. A small house was drawn in on that very spot. It was almost too good to be true. “

Grijzenhout found more evidence to prove his theory in notarial deeds and land registries. Both gates led to a back building and the courtyards in between were quite small. “Everything was exactly how Vermeer had painted them.” Its location on the north side of a canal, the width of the house facade and the gates, the house in the background that stood just slightly to the left, the garden in between where there was apparently a tree, the top of which Vermeer had painted.”
And there was another interesting discovery. The registry document mentioned the name of the owner of the house to the right: Ariaentgen Claes van der Minne. Coincidentally or not, she was Vermeer’s aunt. After the death of her husband, she supported herself and her three unmarried daughters by selling tripe. The alleyway next to her home was known as the Tripe Gate [Penspoort] until well into the nineteenth century.

So this is how a new vision of the “Little Street” emerged. Could the lady in the doorway be Ariaentgen and the younger woman in the alleyway one of her daughters? And could the children playing in front of the house have been her grandchildren, who were also looked after by Ariaentgen from 1663? In that case, the painting must be dated later than the period 1656-1661, which Vermeer experts now confirm. “But the dates on Vermeer’s works are very uncertain anyway”, says Grijzenhout. “So little is known about his life and the creation of his works.”

According to Grijzenhout, Vermeer must often have walked down the Vlamingstraat. His older sister Geertruyt lived across the street, and their mother lived there too during the last months of her life. “Vermeer recognised this area as a very special view of the city, in a somewhat poorer part of town. He witnessed the people toiling away, working hard in the Golden Age. Vermeer himself had removed himself from that class by marrying a rich woman. But he came from that world; this was his background.”

Why is it so important that we know this now? Grijzenhout: “Because it says something about the Vermeer’s relationship with the visible reality. That is an important issue for art historians. It had long been thought that every corner Vermeer painted was his own living room. This romantic, somewhat naïve school of thought was common until the seventies. After that, opinions changed due to the formal aspects of his painting. Much has been written and speculated about Vermeer’s perspective, his rendering of light, his supposed use of the camera obscura. Now we know that Vermeer painted an actual, existing location, a place with which he must have had many personal associations.”

Through his research, Grijzenhout feels we are now somewhat nearer to “Vermeer as a person.” “There has always been an air of mystery surrounding him. Now that we have found the street, we can walk in his footsteps in Delft. That’s very unusual because there’s almost nothing left in Delft today that reminds us of Vermeer. ”

Meanwhile, the current residents of Vlamingstraat 42 know that they live in the “Little Street”. They plan to rename the alleyway alongside their house the Tripe Gate. Of course the main question is whether or not the Rijksmuseum will re-christen the “Little Street”. “Of course the old name must be maintained,” says Grijzenhout. “But if my theory is validated, I would love to see the painting renamed View of the Tripe Gate in Delft, also known as “The Little Street” by Vermeer.”