They are spectacular images: the deep blue sea, the shafts of light from the sinking sun, the dark silhouettes of the mountains on the Somali coast, the six pirates on the prow of the wooden boat, holding their arms in the air. A rubber dinghy is moored at the back of the boat. A marine hoists himself on board. Then the rest of the boarding team follows: khaki overalls, black helmets, weapons at the ready.

By Steven Derix and Huib Modderkolk

The video footage was shot from the HMS Rotterdam. On August 13, 2012, the Royal Navy amphibian transport ship played the leading role in the release of a Pakistani cargo boat off the coast of the northern region of Puntland. But there are two stories behind the liberation of the Pakistani dhow.

The first is that of the successful alliance between international sea powers. Their successes have been widely written about in the media. Ben Bekkering, commodore of the HMS Rotterdam, even appeared on television show Pauw & Witteman to talk about the operation.

The second story is a state secret. It is a story of the exchange of information and technology between the Netherlands and the United States.

Alliances between security services are usually kept secret. But thousands of NSA documents are now in the hands of a select group of journalists, thanks to former NSA worker Edward Snowden. They show that the NSA is the central organisation in an international exchange of tapped telephone and internet traffic.

The Netherlands is also a part of this. In September, the German weekly Der Spiegel published an NSA document about the Netherlands. The graph, entitled ‘Netherlands – 30 days’, appeared to show that the NSA had listened in to 1.8 million Dutch telephone calls.

But last month, the cabinet showed that the reality was different. The 1.8 million telephone calls, wrote home affairs minister Ronald Plasterk and defence minister Jeanine Hennis, were not intercepted by the Americans, but by the Dutch and then shared with the NSA. It was not American, but Dutch espionage.

Two new documents give further details. The Netherlands, it transpires, intercepts vast amounts of Somali telephone traffic and shares it with the NSA. The Dutch use the information to combat piracy. But the Americans may possibly use the information for something else as well: taking out terrorism suspects by attacking them with armed drones. 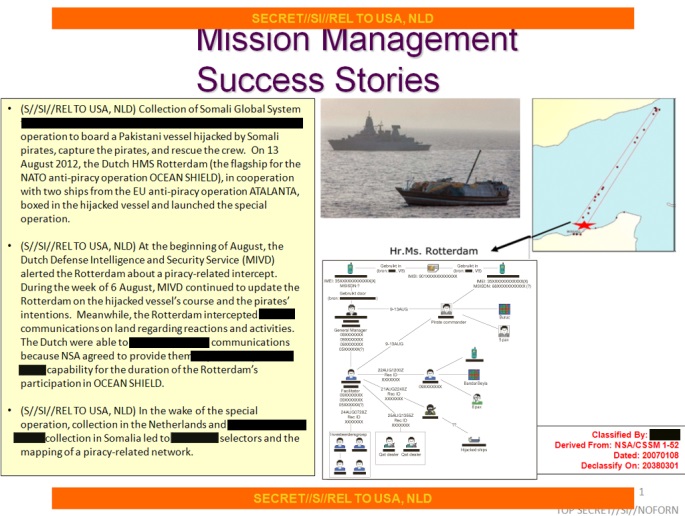 There is a legitimate concern that releasing some of this info could jeopardize legitimate operations and put lives at risk. Therefore NRC Handelsblad redacted some names and telephone numbers of suspects and removed technical details about Dutch interception methods.

In the official version of the release of the Pakistani dhow, the first notification came from the port authority in the northern seaport of Bosaso. In reality, the action began with information from the Netherlands. A French EU frigate gave chase. But when the French caught up with it, the pirates had escaped. They changed dhow twice, like bank robbers exchanging getaway cars. But they were still cornered by the Rotterdam, just off the coast. ‘The pirates are beginning to feel the pressure of the international sea powers,’ Bekkering told the Dutch defence ministry’s audio visual news service. ‘We get information from everywhere, even the Bosaso port authority.’

The information was intercepted by the National Sigint Organisation in the Netherlands (NSO), an alliance between the two Dutch intelligence services AIVD and MIVD and which is responsible for intercepting signals intelligence. The NSO ground station in Burum in Friesland has 22 large and small satellite dishes pointing to the sky. And some of the worldwide satellite telephone traffic picked up in Burum comes from Somalia.

In the second half of 2012, the Dutch were in command of the Nato flotilla close to the Somali coast. In order to do the job properly, commodore Bekkering needed good intelligence. So, before leaving base in Den Helder, the MIVD asked the Americans for technical support to intercept local telephone traffic. This requires specialised equipment and software. Could the Americans supply what the Dutch needed?

The answer, according to a secret NSA document, was yes. And the Americans had good reason to agree. ‘NSA’s access to the pirates’ communication has collapsed,’ the service wrote in an internal document. In 2012 the pirates began to feel the pressure from the international campaign against them. So the pirates stepped up another activity: smuggling people, drugs and weapons. ‘The pirates have shifted to land-based operations,’ the NSA said in the secret document, ‘and the NSA has no access to the Somali communications.’

The Dutch, however, could help. After the successful arrest close to the Puntland shore on August 13, 2012, the Dutch continued to intercept telephone traffic via both the Burum ground station and the HMS Rotterdam. ‘In the wake of this special operation, the interception in the Netherlands and (…) in Somalia (…) has led to the mapping of a piracy-related network,’ NSA wrote.

The international intelligence community has known for a long time that cooperation pays off. Since the Second World War, the US has shared signals intelligence with an exclusive club of Anglo Saxon countries that came to be known as the Five Eye Community. The Dutch military intelligence service MIVD has been cooperating with European partners for decades. By exchanging information, the MIVD gains access to satellites that cannot be ‘seen’ by the satellite dishes in Burum. Sharing information is also an effective way to enhance the interception capabilities of small services such as the MIVD.

The Netherlands has been sharing intercepted telecommunications with the US since 2006. It was the Dutch mission in the Afghan province of Uruzgan, sources say, that ‘accelerated’ the alliance with the NSA. The Dutch mission in southern Afghanistan came to an end in 2011, but not the alliance. According to well-informed sources, there is still a steady flow of telephone data from Burum to NSA headquarters. This does not involve the actual conversations themselves, but metadata, the technical identification marks: the time of the conversation, the number of the caller or the number of the person who is being phoned.

The Netherlands is not the only country doing this. An NSA slide published earlier by NRC Handelsblad shows the US has access to 40 allied ground stations around the world, as well as its own.

This newspaper’s sources stress the Dutch security services are not collecting information for the US on request.

The Somali telecommunications intercepted in Burum are collected to support the Dutch navy mission in the Gulf of Aden. But the Americans are likely to be doing something else with it altogether.

According to the British Bureau of Investigative Journalism, the US has conducted between five and eight drone strikes in Somalia since 2011. Between 10 and 24 people were killed. According to the US, most of them were senior members of the extremist Al-Shabaab movement, which last year openly allied itself with Al-Qaeda.

Metadata play a crucial role in these ‘targeted killings’, according to research by the American website The Intercept, run by journalists Glenn Greenwald, Jeremy Scahill and Laura Poitras.

Secret NSA documents show that the monitoring service works closely with the CIA and Joint Special Operations Command, which carries out the attacks. Greenwald and his colleague Scahill spoke to a drone operator who worked for the JSCOC. This anonymous source said the JSCOC leans heavily on signal intelligence. ‘Everything they turned into a kinetic strike or a night raid was almost 90 percent that,’ he said. ‘You could tell, because you’d go back to the mission reports and it will say ‘this mission was triggered by SIGINT.’

While selecting potential targets, the NSA makes good use of the gigantic amounts of metadata collected on a daily basis - by the US, and by allies like the Netherlands. Powerful computer systems can find links between millions of phone numbers in the blink of an eye. But whether the outcome is always reliable, remains unclear. The anonymous drone operator expressed his concerns to Greenwald and Scahill.

Drone attacks are controversial internationally. Calculations by the Bureau of Investigative Journalism suggest strikes in Pakistan, Yemen and Somalia have led to at least 273 ordinary citizens being killed.

Does the Netherlands play a role in this? The MIVD says it does not know. Intelligence services exchange information but not what they do with it. This newspaper’s sources distance themselves as far as possible from a Dutch contribution to a controversial drones project. But one thing is clear: the Somali telephone traffic shared with the Americans comes from all over the country – from the pirate dens in Puntland to the Al-Shabaab training camps in the south. Will it include the telephone numbers of extremists? The source looks uneasy. ‘That could be the case.’